The Christmas period has brought some interesting new contacts.

One of these concerned the large memorial outside All Saints, Little Kimble, to Mary Daniell and her husband James Whiteman Daniell. 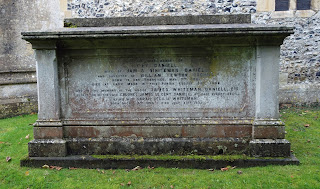 The Daniell family were not in Kimble for very long. They lived at Ladymede under a tenancy agreement with Henry Vivian Gibson Craig.

Mary Jane Coghill was born in San Francisco in 1861, and her first marriage was to  Robert Paul Hastings. There were two children from this marriage, Elizabeth Parker Hastings who became a naturalised British citizen, and Harry Coghill Hastings. After the death of Robert Paul Hastings in 1890, Mary married James Whiteman Daniell in 1894 in London.

Soon after moving to Ladymede, Mary died on 24 August 1906 and was buried at All Saints Church. Her husband James moved to Folkestone, where he died on 27 July 1932. He was cremated at Golders Green Crematorium, and his ashes were then buried in Little Kimble alongside his wife.

An interesting connection is with Mary Valery, born Mary Valerie Piers, who married William Keatinge Clay at St. Nicholas, Great Kimble, in 1909. Mary was ward of James' aunt, and the Daniell family made Ladymede available for the reception.

Any further information about these families would be very welcome.
Posted by Stephen Daglish at 16:11