The Kimble Stewart Hall is the village hall for the parish. It was named after one of Kimble's residents, Charles Edward Stewart and his wife Katherine. Charles Edward Stewart was born near Glasgow in 1866, and his father Andrew Stewart was a prominent industrialist and founder of the company that became Stewart & Lloyds.  Charles married Katherine Anne Dunn in Glasgow in 1900. The family lived in London before moving to Lady Mede in Little Kimble before the First World War. 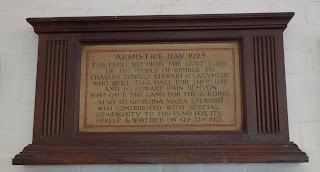 Charles had established his name as a prominent artist of the time, though now rather forgotten. He first exhibited at the Royal Academy in London at the age of 16 and continued to exhibit for more than 30 years.

Although initially a portait painter, his later works include epic scenes of battles as well as more rural scenes of hunting and point-to-point racing. Many of these feature horses and dogs.
The picture below is entitled Balaclava, depicting the cavalry charge, hangs in the Cavalry and Guards Club in London. 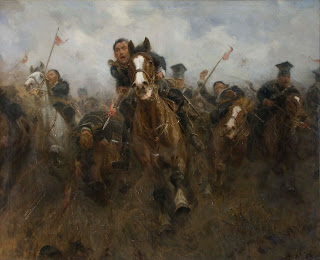 Charles died in 1942. The Bucks Herald wrote about his contribution to village life:

Two of the oldest institutions, namely the Cricket Club and the Horticultural Society always received the support and patronage of Mr. Stewart. His contributions to to welfare of the village took various and practical forms. It was mainly through the assistance of Mr. Stewart that the necessary renovations were carried out to the timber and roofing of St. Nicholas Church Great Kimble. 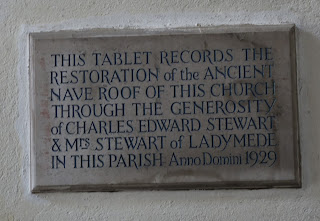 It is perhaps in connection with Kimble Village Hall, now known as the Stewart Memorial Hall, that he will be remembered most. On a site given by the late Mr. E. J. Benyon, near the Kimble Railway Station, he caused a pleasant building to be erected to the design of Mr. C. M. O. Scott, a well known London architect, who is also a Kimble resident. On Armistace Day, 1925, the hall was formally opened.
In memory of his eldest son, Mr. Hector Stewart, who died in 1935, Mr. Stewart had a room added to the Hall and the name was changed to the Stewart Memorial Hall.

His wife Katherine died in 1952 and was buried at All Saints Church, Little Kimble, along with their son Hector Stewart.  Charles is not buried there; instead he asked for his ashes to be scattered at Loch Katrine in Scotland.

Can you add more, or offer any corrections? If so, please do contact me.
Posted by Stephen Daglish at 16:48